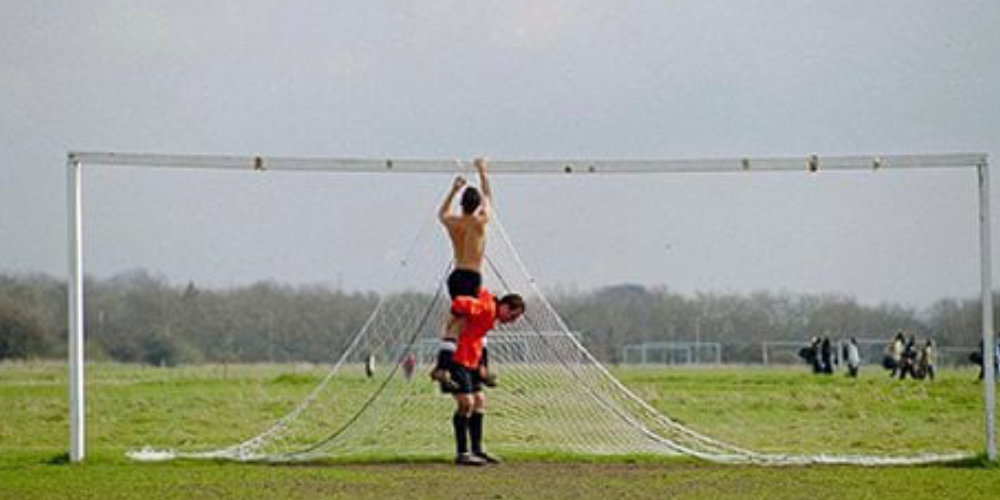 ‘Where’s the Talking?’ A guide to the language of Sunday League football

Going quiet is forbidden in amateur football, so these phrases emerged to punctuate the painful periods of silence.

By Adam Hurrey for Football Clichés

Last week the Premier League, the Football Association and the government announced an injection of £102m into grassroots football over the next three years, with the aim of improving facilities and increasing participation. Discussion about grassroots football often mentions “the community” and “the next generation”, and where positive developments can be made to these valuable ends. But there is a more mundane side to the lowest level of the football pyramid.

Every Sunday morning, thousands of amateur footballers battle against any combination of hangovers, dubious fitness levels and scandalous playing surfaces in a vain attempt to demonstrate that they’ve “still got it”. While the skill levels will inevitably be lacking, one aspect of the Sunday League game is as strong as the top flight.

English football, from top to bottom, has always been characterised by its intangible, unquantifiable qualities of spirit, passion, grit, determination and, less notably, “talking”.

Talking is easy. Not talking enough is generally agreed in Sunday League to be highly counter-productive. Players are urged before kick-off for “lots of talking”, especially “back there”. Not talking is an accusation that can only be levelled at a whole team, rather than an individual (unless it is the captain, who must shout indiscriminately for 90 minutes, for that is his job.)

To avoid this indictment, a set of largely useless phrases has emerged, which can be called upon whenever necessary to punctuate a period of relative silence. Everyone knows them, everyone understands what they are vaguely supposed to mean, and almost nobody questions them.

Clichéd as they are, many strained bellows you hear on a football pitch – “Man on!”, “Out we go!”, etc – are useful instructions. The following set of on-pitch rallying cries, however, deserve closer inspection:

1) “We’ve Gone Quiet”
Going quiet, as highlighted earlier, is the sign of a malfunctioning team. No one is talking, which means they all might as well go home. A period of notable quietness is ended only when the captain draws everyone’s attention to it: “Come on lads, we’ve gone quiet!”. It can, at the shouter’s discretion, be bookended with “…haven’t we?”, to offer the illusion of a debate where one is really not available.

2) “Straight In”
A staple instruction that can be used only at a very specific moment – namely, the opponents kicking off the game. “Run after the ball!”, this phrase demands, “Chase it when they kick it backwards!”. Only the strikers need to do this, of course, and the moment quickly passes. Getting “straight in” is not a continuous requirement, but merely an opening gesture of intent, which is likely to be unfulfilled. It is often accompanied by a mindless, yet somehow entirely appropriate-feeling, clap of the hands.

3) “Two On The Edge”
When a corner is awarded, it is everyone’s job to pick up their man. One eagle-eyed player has the extra task of spotting a discrepancy in this complex marking system, in that there are two unattended opponents lumbering into the penalty area.

In extreme circumstances, there may be “three on the edge” – an unthinkable catastrophe that is met with a suitably incredulous cry of “I’ve got three here!”. The lack of concentration may be down to the defence’s preoccupation with the big man, the lanky opposing centre-back/estate agent who has arrived with a look of great purpose from the back.

4) “All Day”
An utterly irritating phrase (specifically designed to be so) used by smug opponents to declare your attacking efforts as weak and unlikely to succeed, even if repeated. Often said twice in quick succession – as a speculative effort flies into neighbouring allotments – to compound the humiliation.

5) “It’s Still 0-0”
Football is an overwhelmingly childish pursuit. Much of football supporting is based on schadenfreude and suffering the taunts, in return, when your own team is humbled.

To combat this threat, some employ an overly defensive stance, hoping that an audible absence of pride will pre-empt any possible fall. And so, if a Sunday League team races into an early lead, one stern-faced, armband-toting try-hard will attempt to construct a parallel universe in which the game is, in fact, goalless. The job is not done, he insists – a point he may return to when the final score is 7-4 or something similarly amateur.

6) “Box ‘Em In!”
A cult classic, perhaps, which satisfies two fundamental criteria: 1) a laughable attempt at tactical insight, and 2) exclaimed almost instinctively, every single time. The ball goes out for an opposition throw-in, deep in their final third, and it is universally accepted that they do not have the adequate technical skills (or simply the upper-body strength) to play/hurl their way to safety.

7) “[Shirt Colour] Head on This!”
Possibly the most pointless one of all. For the uninitiated, this cryptic command is for your teammates to meet an imminent opposition hoof with their head before the other lot can. No accuracy is necessary but congratulations are available for heading it really, really hard, straight back where it came from. “WELL UP!” you are told, with your name declared in full if the game is particularly tense. More forward-thinking Sunday league players concern themselves with the second ball, which is often simply another header. Third balls remain an untapped, bewildering resource, possibly due to Chaos Theory.

8) “Away!”
Loosely translated as “Now look here, team-mate, I neither want nor trust you to play your way out of trouble. Please dispose of the ball as quickly and as far away as possible.” Failure to do as directed leaves one open to castigation for “fucking about with it there,” but this may be permitted if the player is in possession of a sufficient amount of…

9) “Time!”
The ball drops from the air and a player finds himself in acres of space. Pointing this out to him might seem a good idea. It’ll calm him down, allow him to get his head up and play a pass, rather than treat the ball like an unpinned grenade.

However, when 10 other players scream “Time! Time!” in unison, it tends to have quite the opposite effect. The futility of the situation is laid bare when, after giving away possession easily, the player is offered a final, withering, retrospective observation: “You had time.”

10) “Who’s got tape?”
The gold-dust of amateur football, despite being available in any hardware shop. As the sole provider of ankle-securing tape, once you declare and dispense it, you will never see it again.

11) “Ref! Ref! How long?”
Usually asked by an overexcited player from the leading team, with surprising desperation. Whatever the answer, the player will always add about 10% on before relaying the revised figure to his teammates.

12) “Watch the short!”
It is considered a cardinal sin to let an opposing Sunday League team pass a goal-kick out to a full-back. Precisely what sort of devastating attack an average Sunday League team are expected to be capable of, deep in their own half, with the ball at the feet of traditionally the least capable player in their ranks, is anyone’s guess.

Amateur-level goal-kicks, thumped aimlessly as far down the pitch as possible, often aren’t a job for the goalkeeper. As the designated goal-kick taker for their sides, many Sunday league centre-halves can confirm that fetching a distant match ball in preparation for this moment is one of the more soul-destroying aspects of life at around 11am on every Sunday between September and May.

14) “Don’t let it bounce!”
A rare example of a phenomenon that afflicts a Premier League side just as much as it does your Sunday morning rabble. Letting the ball bounce, especially “back there”, is traditionally asking for trouble.

15) “Where Was The Shout?”
The ultimate act of Sunday league buck-passing. A player is unceremoniously dispossessed from behind, to howls of derision from his teammates. Accompanied by a despairing flap of the arms, the player begs of his colleagues: “Where was the shout?!” There wasn’t one. Because they’ve gone quiet, haven’t they?